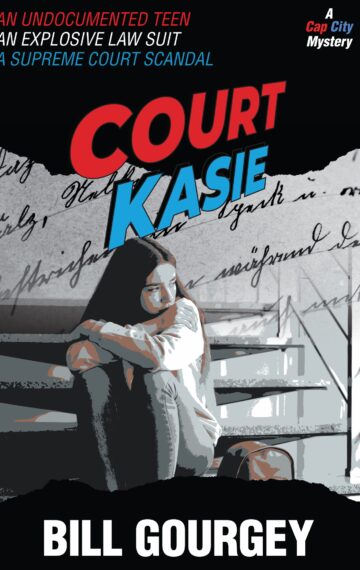 A plot to bribe a Supreme Court Justice…

A case that could ignite a nation?

Fifteen-year-old Kasie has always been an exceptionally gifted student. Unfortunately, she’s also an undocumented immigrant. Ever since her parents were deported during a politically motivated ICE sweep, she’s been living with her friend’s family, in fear of ICE. But she’s continued to excel at school, and with the support of her mentors, applies for DACA, which provides her with the work permit she needs to become an intern at the Supreme Court Library. When the ICE agent who deported Kasie’s parents comes looking for her, she flees and hides out at the Supreme Court. There, she discovers a plot to bribe a Supreme Court Justice in an explosive new case whose outcome could affect the lives of millions. With nowhere left to turn, Kasie finds herself having to choose between her own future and the future of the only country she’s ever called home.

The story of a DREAMer who just wants to fit in

America is a mosaic, a nation of people whose ancestry can be traced to every region of the world. But America’s history involves the clash of peoples, too, and there are those who perpetually live in its shadows. As many as eleven million undocumented immigrants, representing roughly 3 percent of America’s population, live and work in fear of deportation. Their only hope: to someday become citizens. This is the story of one promising young immigrant’s hopes and fears.

A glimpse of the challenges faced by America’s highest court

The Supreme Court of the United States (SCOTUS) has a rich and storied past. Its colorful and often bitterly contested cases have changed the course of America’s history. But the modern Supreme Court faces challenges on all sides—from divisive politics, to relentless globalization, and intense corporate lobbying—that threaten to transform it forever.

This fast-paced book shows what happens when the hidden world of undocumented immigrants runs into the highest court in the land!