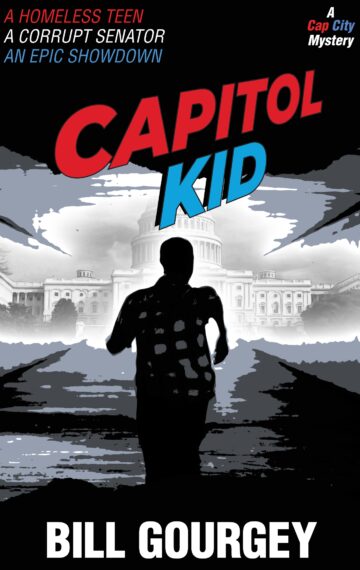 On the run from local drug dealers, a young hacker hides out in the U.S. Capitol and soon finds himself entangled in a dastardly political conspiracy.

From the shadows of the U.S. Capitol, can a runaway change his country?

When thirteen-year-old Boot doesn’t have the money to pay his mom’s drug dealer, he must flee or face certain death at the hands of the gang leader who rules his DC neighborhood. The glittering dome of the United States Capitol Building, which looks like the Emerald City of Oz from across the Anacostia River, seems like an ideal hide out until Boot discovers that the halls of Congress may not be all that different from the ruthless streets he fled. In Capitol Kid, a well-heeled politician at the pinnacle of power squares off with a savvy street urchin in a thrilling showdown that shakes Washington, DC.

A Rare View of the Gilded Halls of Congress

From the Senate Chamber’s renowned Candy Desk to bizarre accounts of murder and intrigue in the halls of Congress, this book is peppered with eye-popping historical facts of one of our nation’s most prominent landmarks: the U.S. Capitol Building.

Is it really true that your phone’s camera and mic can be hacked? Ever wonder if your IDs and passwords are safe? This book offers a chilling account of how readily available apps and black market devices can be used to spy on our every conversation and keystroke. It’s fiction, but just barely.

This fast-paced book will make you laugh and cry, and will keep you on the edge of your seat!